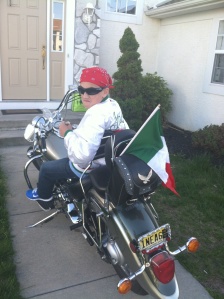 Nickie Boom makes no bones about the fact the he is a guido. Is he rude? Yes.  Is he crude? Definitely! Is he politically incorrect? Absolutely. But, in Boom’s mind, he’s ALWAYS right and that’s ALL that matters.

For instance, Nickie Boom refers to women as “Broccoli Rabes” (a form of broccoli frequently enjoyed by Italians).   On a regular basis,  Boom is threatening the safety and lives of those around him with comments like “I’ll cut your troat (not throat but TROAT)” or “how bout I come ova there and knock your teet out, huh? Again, not teeth, but TEET. Sure, he may not pronounce EVERY word correctly and he IS completely inappropriate at times, but Nickie Boom is not governed by the same social laws as you. What’s even more unique about the Boom is that he is a graduate of a very prestigeous Ivy League School and is an advocate of education.  However, Boom feels that informatin will hurt his “street cred” so he keeps it under wraps.

Although he clearly knows better, this  prodigy is in love with the old fashioned Italian mob mentality and refuses to evolve his thinking.  But again, that’s what makes him Nickie Boom!!

Nickie Boom is proud of many things but most of all, he’s proud of his Italian heritage. He feels goombas get a bad rap given the fact that Itlians have made so many positive contributions to the world.  Boom’s motto in this regard “do not judge a book by its cova and appreciate the Italians for what they are, the GREATEST!”   This self-proclaimed “inna-net sensation and philosafa” spews out his views and opinions via staments such as “You can’t worry about what people think of you when your trying to get ahead in this world,  the only thing a person really needs to focus on in life is their hair” and “people can run all they want from the Itlian stereotype, I EMBRACE IT!”